Here is where we present some of the more interesting projects we have been involved in recently and over the last 35 years. Some technologies are amusingly outdated, others are cutting edge. We hope you find them interesting, and that they may even spark some ideas or inspiration for you. Enjoy!

Head-Smashed-In Buffalo Jump
Designated as a UNESCO World Heritage Site in 1981, Head-Smashed-In has been used continuously by aboriginal peoples of the plains for more than 5,500 years.
Click the image for more photos and information 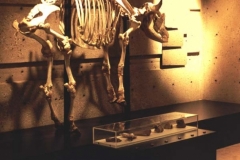 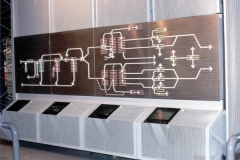 Telephone Historical Centre
See, hear and do at one of the most enjoyable attractions in Edmonton. The Telephone Historical Centre opened to the public in 1987, and is the largest of its type in North America. Perfect for all ages. A special highlight is our multi-media presentation featuring Xeldon, the talking robot and great historical footage of Edmonton.
Click the image for more photos and information 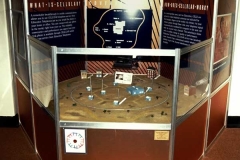 The Rising Debt Briefcase
Using a case to make a case. Former Alberta Liberal Party leader Lawrence Decore with a briefcase mounted LED display that  which calculated, and displayed in real-time, Alberta’s accumulated provincial debt, based on the then-current interest rates. Debt is less of an issue for Alberta these days.
Click the image for a larger version. 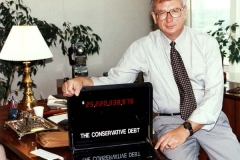 “Electrics” Robot
This robot was custom-made for Electrics family restaurant. The robot was designed to look like a space ship when moving in a horizontal position. When upright, the robot’s front panels opened to reveal a costumed dancer, who then exited the robot to continue the performance.
Click the image for a larger version. 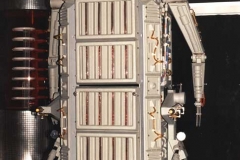 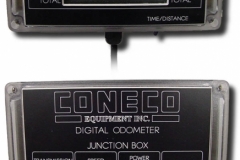 Helicopter Carousel Controller
A helicoptor carousel is a cylindrical apparatus that hangs beneath a helicopter and holds from eight to sixteen bags of seismic supplies. The bags contain equipment that is dropped to crews on the ground. The bags hang on hooks which are connected to solenoids. When a solenoid is energized, it releases a bag allowing it to drop to the ground.

The controller that Trinity Electronics designed sits in the center of the carousel and connects to the solenoids. The challenge was to replace an electromechanical unit that received only a ground, reset and 24 VDC trigger pulse. There was no continuous DC supply so this unit has to power up, read memory to determine the current step, increment and store the step number, release the next hook and then prepare to power down. It had to perform this function in all kinds of weather, in arctic temperatures and be immune to high electrostatic charges.

This product was custom designed for Canadian Helicopters Ltd. 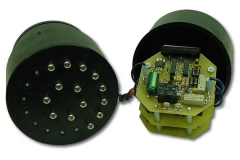 Simulated Rocket Launcher
Adjust the amount of payload and fuel on this simulated rocket to get the launch height just right. 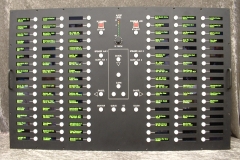